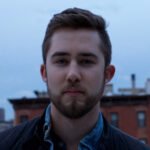 Anderson Cook is an educator and a writer for the stage & screen with a wide range of teaching experiences: creative and expository writing at Writopia Lab in Park Slope for elementary through high school students, SAT and ACT prep for A-List Education, and English instruction for undergraduates at New York University. With this diversity in teaching experiences, Anderson offers students at Cohen Math Prep lessons  ranging from English to grade 3-8 math or from creative writing to...

Anderson holds a BFA and MFA in dramatic writing from the Tisch School of the Arts at New York University and the Carnegie Mellon University School of Drama, and he is a member of the BMI Lehman Engel Musical Theatre Writing Workshop. His plays and musicals have been seen at venues like (le) poisson rouge, the Boston Conservatory, Dixon Place, the Lee Strasberg Theater & Film Institute, and comedy clubs and rooftops across New York City.

He is the recipient of a 2018 Sloan Screenwriting Grant from the Alfred P. Sloan Foundation, and a winner of the 2017 NMI New Voices Contest, co-sponsored by Walt Disney Imagineering. He’s a semi-finalist for the 2019 National Playwrights Conference at the O’Neill Theatre Center, and a finalist for the Echo Theatre’s National Young Playwright.